Charles Jong – The Big Brother Who is Spying on Bajans? 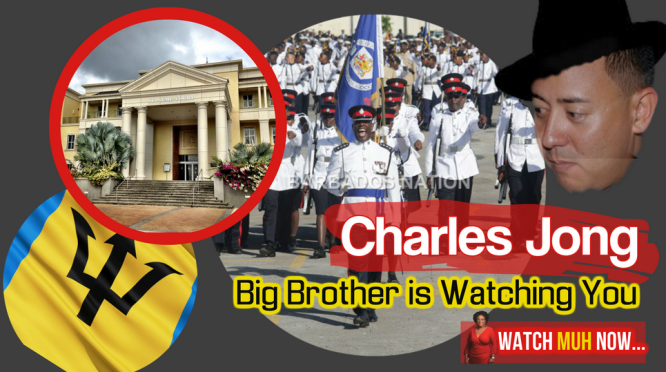 Barbados/Bajans are at war, as we were 75 years ago when, on 11 Sept 1942, Canadian Steamer Cornwallis was torpedoed in Carlisle Bay by the German U-Boat 514.

But at 2018, some are saying that the “torpedo” that has been launched at us comes ironically from a  Hitlerian source in a form fashioned for the times, a precision torpedoing manifest in Charles Jong, emirate of Mia Mottley

But “Integration & Unification” of IT systems IS NOT KEYLOGGING SOFTWARE or so coding the cascading style sheets and “like buttons” on websites  wunna machines visit that each click exposes your “referer url” (where you come from shopping on Victoria Secrets or BBBWsex.com.( I met up dat last site  but wunna could check if it exists)

De Ole man ask you smart Bajans if such an agent is and enemy to the government of Barbados and its people? and does his insertion at the level of our GIS department (with the accord of the Minister Lucille Moe) constitute VIRTUAL TREASON? Is this not an act of “…betrayal of allegiance toward one’s own country, especially by committing hostile acts against it? …”.

But Imagine if wunna on a “non friendly” site? with a fellow versed in using streaming and flash leaks to subvert your machine? So what if, INSTEAD OF STREAMING WUNNA GOVERNMENT BROADCASTS from government GIS servers,  DEM DOING SO FROM THE Barbados Labour Party Website?

De ole man will try real hard not to  make this submission and article on “The ineffectual nature of the Leader of the Opposition and his Senators but wanna get where de ole man coming from?

But, only recently, our Luminary Mr. Jeff Cumberbatch posted and article titled “The Jeff Cumberbatch Column – Enhancing the Freedom of Democratic Expression II” in which he made reference to the Charter of Fundamental Rights of Jamaica which in part stated  “Parliament shall pass no law and no organ of the State shall take any action which abrogates, abridges or infringes those rights…”

De ole man posits that the engagement of Charles Jong by the Government of Barbados, presents a situation rather THREAT to the sovereignty of Barbados and the Rights of citizens, a situation which is unchallenged by the puppeteer Opposition of Bishop Reverend Father Atherley.

De ole man believes that the complete remit of JONG has PURPOSELY not been provided and that given his true MANDATE, such constitutes a National Security concern which assuredly our Attorney General Dale Marshall and Minister of Home Affairs Edmund Hinkson should be examining for and on behalf of the people of Barbados.

Indeed the country is now, and continues to be, under serious threat since our “PARLIAMENT, while not passing any laws, is using the organs of the State to “abrogate, abridge and infringe on the very rights…” of Bajans

But who gives a flying shyte anyways??

The Barbados Covid authorities have reported to Worldometer that there are now zero active cases of Covid 19 in the Island. This is huge. It is the first time this year that we have had no active cases and reflects the excellent work that the Covid team has been doing, despite a number of alarums, since the outbreak started. The Covid news have not been so kind to Jamaica, nor T&T, nor Guyana. Jamaica is showing the first signs of decreasing cases, after plateauing but T&T is still climbing rapidly. St Lucia is showing a slight upward trending in its relatively low number of active cases - Lyall Small (See COVID 10 Updates Page)