The following comment inspired the blogmaster to expand the focus on data collection and discussion about the COVID 19 pandemic. Thanks to @Lyall@Amit

You are correct but I have indeed considered that cohort of the population.

The reason that the US experts are beating the drum for testing, testing and more testing is to get a handle on what proportion of the general public has been compromised by the virus in any way and has left its signatures in body fluids including blood in the population. The virus is shed from the infected body as the disease is brought under control. When it is controlled it has been found that it takes around 7 days for all particles to be shed from the body. Infected persons are released back into the community when they test negative twice over a period of 2 days.

Barbados, like all of our island neighbours, did or does not have access to large numbers of tests and had to use what we had very sparingly. Thus, the only measure that we had for gauging the incidence of the virus in the population (and a very imperfect one, at that) might be by comparing the evidence of infection levels hinted at by a comparison of the graphs of the progress of the various Covid-19 outbreaks in our Islands.

Most of the world was in the same position as the Caribbean and used the data obtained by the minimal testing of infected people and their contacts and their contacts to produce the graphs we see on such sites as WHO and Worldometer etc. All these graphs give an imperfect picture and significant underestimation of infection levels in the county or country in which the tests are carried out, but, since they are carried out in the same way in each country they might provide some rationale for guesstimating the comparative levels of the infection in various groups of countries.

The data shows that, starting out at essentially the same levels, there was some divergence in relation to the rate of infection and therefore progress of the various outbreaks in various countries. The graphs for Barbados showed low and declining levels of infection from the beginning, peaking at the level of 13 positive cases per day and thereafter showing a slowly declining trend. The individuals who would have contributed to the declining trend would have been primarily from the contact testing but should also have included other individuals referred by Health professionals or who presented themselves to Government institutions because of concern that their symptoms might point to untimely death due to the dread Covid-19.

Amit, in an earlier post on this blog, reported on his initiative of graphing Covid-19 incidence over weekly periods throughout the epidemic, in several Caribbean Islands. If David thinks it is appropriate and Amit agrees I can post a subset of graphs clipped from his data for 6 Caribbean territories which I think could illustrate some of what I have presented above.

There was 1 more positive case announced today as well as 1 death. A slight uptick of the daily cases line is indicated in the graph by the blue line. The total cumulative number of positive cases from the tests carried out yesterday is 76 – Llyall Small 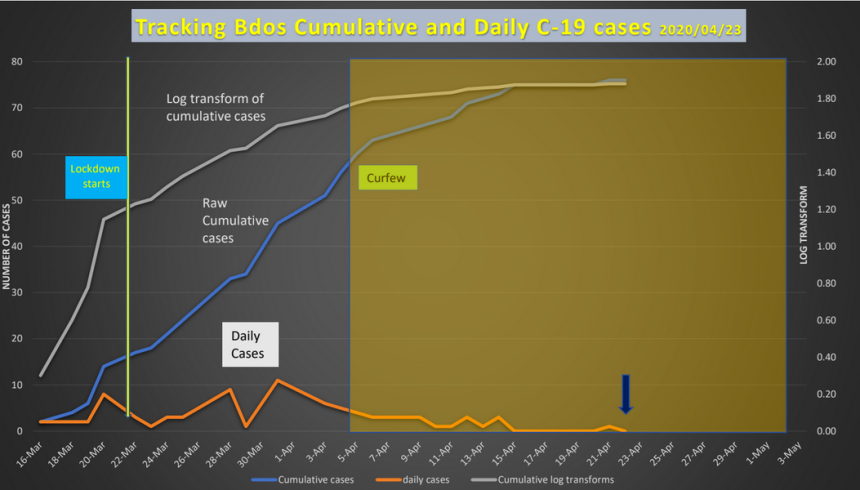 Attached is the updated C-19 graph for 2020-04-23. There were no additional positive cases from yesterday’s tests and therefore cumulative positive cases remain at 76 – Lyall Small

Two new positive cases were identified from yesterday’s tests. There are now 5 cases of contacts with a previously identified individual. The 5 cases are workers from a Government Institution. Tests are ongoing today (25 April 2020) – Lyall Small

There was one additional +ve case identified today (27 April 2020) from the last tranche of NAB workers moving the cumulative total cases to 80. The graph is still essentially trending downwards – Lyallsmall