Communism, Marxism, and 21st Century Socialism are anti-Democratic. The attempt by the ULP leadership to fool Vincentians into believing they and the ULP party are democratic with democratic policies must be treated not just as untrue, but as totally unacceptable.

Bribing Vincentian people using Vincentian taxpayers’ money to do it. Doing it now before the upcoming elections with building materials is an extreme undemocratic action.

Being caught in election fraud during the 2016 elections has not taught them anything.

Many articles about bribing the people with building materials have been published, and they do not care that the current bribery action is being recorded and filmed, to be published internationally.

The continuing distinctly undemocratic behaviour tells us that if they are blatantly bribing now while being watched and scrutinised, they will blatantly do what they did last time and stuff the ballot boxes and have people voting more than once in more than one constituency, using ghost voters and dead peoples votes. Because if they are willing to do one dirty operation, you can guarantee they will do all the others this time exactly as they did last time. Also, you can be sure that whoever is guiding this undemocratic action will now introduce even more dirty tricks to steal the election.

They believe they are untouchable, and the people approve of them being elected by whatever means they choose.

Suppose we look at everything that the ULP has done while under the present leadership over the last twenty years. Everything they do or have done that is undemocratic. 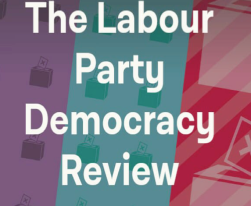 Bringing down the properly elected government of SVG by revolution, ‘the roadblock revolution’.

Falsely promising people at the time an across the board 30% pay rise, they never paid it.

Giving the teachers a contract, which was knowingly unenforceable and unconstitutional, while lying and saying it is the best ever.

Telling hundreds of lies to the people, to parliament, to anyone who will listen.

Touring the world to scrounge from undemocratic governments.

Taking payment from governments with known human rights abominations and then voting to assist those countries and those dirty violating leaders by voting in their favour at the UN.

Taking money from Venezuela, while women and babies are starving.

Taking medical goods from Venezuela while people are dying of COVID virus in droves.

The nasty, wicked, cruel, and malicious treatment meted out to citizens like Bigger Bigs, Marcus De Freitas, Randolph Toussaint, the teachers, the unions, to anyone who is recognised as not supporting the ULP government or its leadership. There are simply hundreds affected.

Demanding and instructing Vincentian businesspeople not to become politicians.

People are beaten at police stations, police acting as political police on behalf of the regime, Police Special Branch illegally gathering information on the opposition party, sending police to raid those who do something politically opposing the regime, police obtaining search warrants with fraudulent applications.

Extrajudicial killings suspected but not proven.

Sending Tax and VAT inspectors to people homes and businesses for political reasons, to disrupt and cower them.

Buying church and religious leaders with tax-free and import free status to control what they do and say, ensuring they stay in line with the rules of the regime, making them political tools.

Making nasty and dirty hand gestures to people who displease the regime.

Frightening newspaper and online media owners and editors to stop them from publishing exposė’s of political dirtiness.

Introducing acts of parliament to stifle online commentary and freedom of speech.

Being accused and not appearing before a court when accused of rape and sexual assault.

Giving out passports with citizenships without transparency and in secrecy.

Announcing “we will hunt them down until they exist no more.”

Announcing to a Christian based society and citizenship that “If I work Obeah, I only work Obeah for the Lord” which is a grossly based Blasphemy. An insult to all worshippers of God.

There is much more, and it is all undemocratic. If you remember what I forgot, please list it in the comments below.

If there is anything written here that you would like me to explain, just ask in the comments section.

Democracy in SVG under the ULP and its leadership does not exist, not at all.

The claim of Democracy is little more than a fraud on the Vincentian people.