The following is an extract from Pat Hoyos’ column which appears in today’s Sunday Sun. BU cannot find a link online but a scan of the article titled Karib goes with the Flow does the trick. And why do we find it interesting you ask? Hoyos appears to be a little protective in his writing. Come on Pat Hoyos, tell us what is really stuck in your craw like the proverbial chicken bone!

AT THE TIME OF COLUMBUS’ LAUNCH in Barbados were negotiations already under way with Karib Kable? My silly, inquiring mind wanted to know. Not for any particular reason. I just like to think about such things rather than find myself playing stupid games on Facebook with “friends” I have never met. From the time it officially announced its arrival in Barbados last year through the purchase of TeleBarbados, it seemed like a whole lot of nothing was happening on the street level as far as Columbus was concerned.

Meanwhile, almost everywhere you turned along certain highways and byways, you were in danger of bumping into a Karib Kable van parked under an electricity pole, its linesmen busily “building out its network”. But then, when you stopped at its sales kiosks and asked a question, you were told that the service would only be available in certain parts of the island. So TeleBarbados’ existing set-up remained more or less untouched (it seemed) by its new owners, while Karib Kable was busy as beavers. 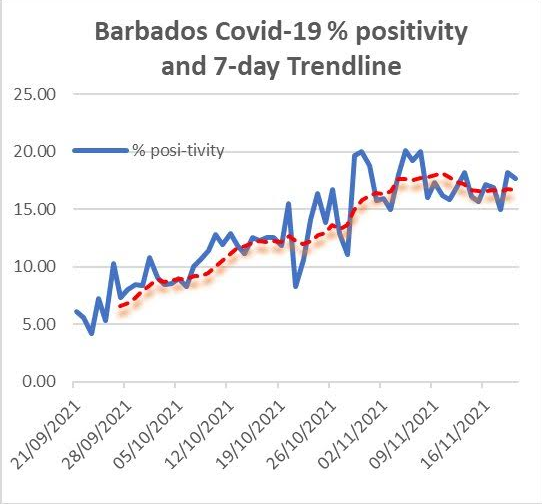 David; Attached are the charts for the week ending 19th November. I reduced the intervals on the time axis of the daily incidence graph to more clearly show the clear current decrease in the 7-day trendline. The decreases are quite gradual suggesting that control is not likely to be as precipitous as say in the recent Grenada spike. Positivity is also slowly decreasing but we are still far from the 5%. Vaccinations are increasing - Source: Lyall Small