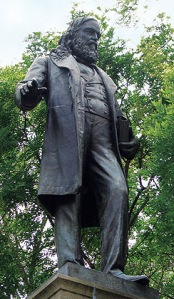 Albert Pike, one of the greatest figures in the history of Masonry - Johnny Davis, 32°

“A Personal Christian View Regarding Freemasonry”

The deepest secret is that life is not a process of discovery, but a process of creation. You are not discovering yourself, but creating yourself anew. Seek, therefore, not to find out Who You Are, seek to determine Who You Want to Become.

I believe many Freemasons are deceived. This path for many is a way into secret societies where initiation, rites and ceremonies brings with it social prestige and standing amongst your peers and contemporaries. However, the question must be asked, what is Freemasonry? What are their beliefs? Are those beliefs compatible with our Christian ethos and values? And can we continue to turn a blind eye to what could be a fatal flaw of judgment?

As a former British colony and protectorate, Barbados came under Masonic influence in 1740 when the Provincial Grand Lodge of Barbados was founded in that same year. So for almost 270 years Freemasonry has been embedded on our shores as a rite of passage for the upwardly mobile in our small society.

In the book ‘The Illustrious Manly P. Hall’ probably ‘Masonry’s Greatest Philosopher’, says that “the world is a far better place because of Manly Palmer Hall, and we are better persons for having known him and his work”. The said Manly P. Hall states that, “Freemasonry is a fraternity within a fraternity…an outer organization concealing an inner brotherhood of the elect” …

What do these statements mean in context?

Let us turn to the definitive Masonic author, writing in the book, “Morals and Dogma”, which is the training manual for each of the 33 degrees of Freemasonry. This is the man to who much praise and adulation has been given by subsequent Masonic authors. His name is Albert Pike. He is the man whose large statute graces the Masonic Temple in Washington, D.C.; Pike is the man lauded by Kessinger Occult & Freemason Publisher as saying, “if you want to understand Freemasonry, you must understand Albert Pike”.

Many well-meaning men are members of this visible freemasonry society with no knowledge whatsoever of the inner workings of the invisible society. In fact, Albert Pike had some things to say about the brethren in the visible society. This is what he says: “Masonry, like all the Religions, all the Mysteries, Hermeticism, and Alchemy, conceals its secrets from all except the Adepts and Sages, or the Elect, and uses false explanations and misinterpretations of its symbols to mislead those who deserve only to be mislead; to conceal the Truth, which it calls light, and draw them away from it.” [Morals and Dogma, p. 104-5, 3rd Degree]

Pike then completes his instructions to intentionally mislead those members of the visible society, by saying: “So Masonry jealously conceals its secrets and intentionally leads conceited interpreters astray.” [Ibid. p. 105]

If a man were known to revere Jesus Christ in the beginning of his membership within Masonry, he would be immediately shunted into the visible society, and would never, ever learn the truth. You would never be considered an Adept, or a Sage, or one of the Elect, for those terms are reserved for the members of the “invisible society”. You would be one of those who were deliberately lied to about the doctrines of Masonry, and given deliberate misinterpretations of its symbols, so that you would merely THINK you knew the truth.

Members of the visible society are referred to as the ‘masses’, and you do comprise 95% of all Masons. Listen to what Pike says about telling the truth of the organization to the ‘masses’: “A Spirit”, he said, “that loves wisdom and contemplates the Truth close at hand, is forced to disguise it, to induce the multitudes [that is you] to accept it … Fictions are necessary to the people, and the “Truth” becomes deadly to those who are not strong enough to contemplate it in all its brilliance.” [Morals and Dogma, p. 103, 3rd Degree; (Emphasis supplied are mine)]

If a person is not capable of accepting the Truth that inner-core, invisible Freemasonry really worships and serves Satan, and then such truth would become “deadly” to you. Therefore, “fictions are necessary” so visible Masons would not be so devastated that they would leave Freemasonry and expose its inner secrets.

A book written ten years ago also speaks of these two organizations.  David Ovason, a noted astrologer, has written a book published in 1999, entitled, “The Secret Architecture of our Nation’s Capital:  The Masons and the Building of Washington, D.C”, and New Age author, Bill Cooper book “Behold A Pale Horse”.

So let us hear what Albert Pike says about Freemasonry and also what he says about Christianity. Albert Pike states that “the Apocalypse is, to those who receive the 19th Degree, the Apotheosis of that Sublime Faith which aspires to God alone, and despises all the pomps and works of Lucifer.”

In other words, “that mean old dirty God, the equal but opposite of Satan, despises all the pomps and works of Lucifer”. On page 567 of Morals and Dogma, Pike states that, while Satan created this world, the soul of man emanated from God, thus setting up a very long conflict between God and Satan.

Then, Pike launches into a defiant and glorious defense of Lucifer, by saying: “Lucifer, the Light-bearer! Strange and mysterious name to give to the Spirit of Darkness! Lucifer, the Son of the Morning! Is it he who bears the Light and with its splendors intolerable, blinds feeble, sensual or selfish souls? Doubt it not! For traditions are full of Divine Revelations and Inspirations: and Inspiration is not of one Age or of one Creed. Plato and Philo also, were inspired.” [Morals and Dogma, p. 321; Lucifer similarly glorified on page 567]

Right here, Masonry is proven to be NON-Christian, as Jesus said so emphatically: “I am the Way, the Truth, and the Life: no man cometh unto the Father, but by Me.” [John 14:6] You cannot believe other religions are as valid as Christianity based on this statement of fact and still think you are a Christian; on the other hand, you can certainly “think” you are a Christian, but whether you get into Heaven depends upon whether the Lord Jesus Christ recognizes you as His own. Either way, Jesus’ words are either the Ultimate Truth or the ultimate lie – we must choose!

In the Bible, the Word of God tells us in 2 John 1:7 that “many deceivers (false prophets) are entered into the world, who confess not that Jesus Christ is come in the flesh. This is a deceiver and an antichrist. (KJV)

Whatever our belief structure on this matter – one thing is indivisibly clear and that is – Freemasonry and “Biblical Christianity” are wholly synergistically opposed to one another both in terms of aporia, or apophthegm, and in sententious utterance.

We must choose where we want to stand!!!