BU asked by multiple sources to circulate the following:

Please circulate this as widely as possible. The Empire’s WEAPONS OF MASS DECEPTION are spewing out fake news and false narratives 24/7. This constant misinformation campaign is one of the most potent weapons in their arsenal when it comes to destabilizing and overthrowing progressive and revolutionary regimes. Let us resist this with all of our collective might in the case of Venezuela.

In unity and struggle,

What’s REALLY happening in #Venezuela – from someone who knows 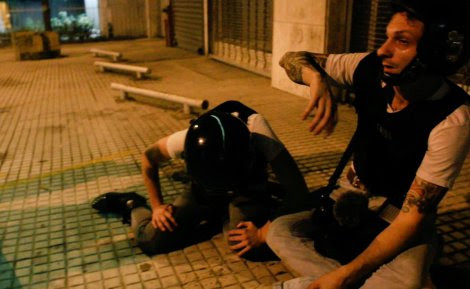 Mike Prysner is a former US Army soldier turned documentary-maker, who produces and co-writes The Empire Files for Latin American broadcaster teleSUR English with Abby Martin. He was, until recently, in Venezuela covering the troubles there.

Mike generously gave the SKWAWKBOX his time for a lengthy interview from Los Angeles on the real situation in Venezuela from his first-hand experience. What he related is eye-opening.

And it’s very different from the line we’re being fed by the UK’s press, broadcasters, pundits and right-wing MPs – and it’s startling from the outset.

You’ve heard about attempts by the UK Establishment to weaponise Venezuela against Jeremy Corbyn?

When I heard that Jeremy Corbyn had condemned violence on both sides in Venezuela, I was angry at first – because 80% or more of the violence is being committed by anti-government protesters. Their violence has far surpassed anything committed against them – and what has been done to them has been deliberately provoked.

But then I began to recognise the skill in his statement – forcing everyone to confront the reality of what’s happening on the ground there. The reality bears little resemblance to what’s being presented to people.

You recently returned to the US from Venezuela. What were you doing down there?

I was there with a team from teleSUR, meeting government leaders, people on street, chavistas [supporters of the socialist government, after late President Hugo Chavez] and in opposition areas, seeing what’s it like in different areas.

And it’s not like we’re being told here in the UK?

The BBC is responsible for some of the most disingenuous portrayals. They’re showing violent protesters as if they’re some kind of defenders of peaceful protesters against a repressive police force, but in reality peaceful protests have been untouched by police.

What happens is that the guarimbas [violent, armed opposition groups] follow the peaceful protests and when they come near police, they insert themselves in between the two. They then push and push and push until there’s a reaction – and they have cameras and journalists on hand to record the reaction, so it looks like the police are being aggressive.

We were once filming a protest and a group of guarimbas challenged us. If we’d said we were with teleSur, at the very least they’d have beaten us and taken our equipment. But we told them we were American freelance journalists – they need Americans to film them and publicise them, so we were accepted.

The battles with police are actually quite small, but they’re planned, co-ordinated to disrupt different area each day to maximise their impact – but in most places life is pretty normal. It’s all about the portrayal. The US media mobilise everything for guarimbas – there will be maybe 150 people but it’s made to look bigger and tactics are 100% violent – trying to provoke a response.

And the level of police restraint is remarkable – the government knows the world is watching. One evening protesters were burning buildings for around two hours, with no intervention by the police. They only react when the protesters start throwing petrol bombs at the police or military, or their bases – but as soon as they do react, the guarimbas film as if they’re victims of an unprovoked attack. 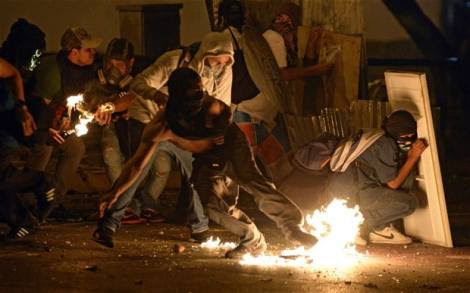 The Supreme Court was set on fire, lots of government buildings have been destroyed – all by the supposed ‘victims’.

The targets of protesters have been the government’s low-cost city buses, beating the bus drivers; they’ve attacked food stockpiles – which is odd when they claim to be protesting about food shortages. One government food stockpile of 50 tonnes was burned. They even attacked a maternity unit, forcing the women to flee.

We saw people on the highway pulled out of vehicles and the vehicles taken to build barricades – even then the police response was extremely restrained, even minimal. I’ve seen protests far more harshly policed in the US.

Telesur English has been keeping a running tally of deaths. So far there have been well over a hundred – and 80% or more have been from opposition violence – a female national guard officer shot in the throat by snipers, people set on fire [warning: graphic video] for supporting the President, a lot shooting at the police and military, along with random shootings of civilians. There have been at least two roadside bombstargeting police convoys. 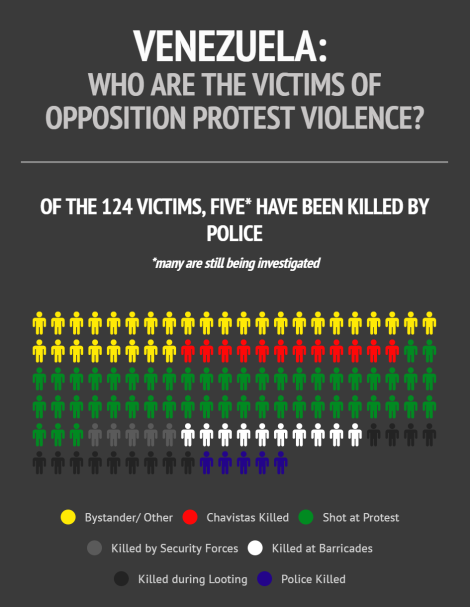 Some protesters have real guns but there are home-made guns and rocket-launchers as well. Some protester deaths have been caused by their own home-made weapons blowing up on them. Lots of people have been killed at the burning traffic barricades.

There have been well over a dozen chavistas who were followed away from peaceful pro-government rallies and killed on their way home or in restaurants by guarimbas.

But the external perception is being controlled. Lopez and the others have their own media apparatus, coordinating the perception-management. There’s a wealth of evidence that lot of protesters are getting paid, people arrested and then trying to get out of charges by confessing to being paid to cause trouble.

Also bringing kids out to protest – cynical to bring kids out and put them on front line to get photos and blame govt.

So it’s safe to say that the opposition protesters are not fighting for democracy?

Democracy is absolutely not their aim. This is a small group of people led by the owners of large monopoly corporations. The opposition can’t win at the ballot box – they’ve tried but can’t reverse the left-wing gains and a huge majority of the people are behind the government. So they’re trying to bypass democracy, that’s why violence is the tactic.

There are no anti-government protests in poor areas, only in the well off areas, protesters are wearing expensive jewellery – the rich areas are also where most of the deaths have occurred.

There’s also economic violence. The opposition leaders are owners of large corporations and they are trying to tank the economy. If Maduro lines up international finance, they have intervened to prevent the loans going through.

The one loan that did go through recently – Wells Fargo, I think it was – became the subject of big PR campaign against it – the opposition is trying to make things worse for people.

They’re even creating shortages – of the nine commodities in shortest supply in Venezuela, a single company owned by an opposition leader is responsible for seven of them – and there are stockpiles, but they’re kept out of circulation to create shortages. And of course, where the government has warehoused supplies ready for distribution, those have been attacked – like those 50 tonnes of food that was burned.

Diapers and toilet paper are shown as in short supply – they are in the stores, but it’s easy to get both on the black market. There’s no shortage, it’s just being channelled elsewhere – again, by those opposition-controlled corporations.

The violence is to create the perception of a failed state to set the scene for outside powers to make ‘humanitarian’ interventions. They’re claiming a Maduro ‘dictatorship’ – but these are same people who overthrew the government in 2002, installed a dictatorship, cancelled the legal system and immediately set about reversing social gains.

The only way they can rule in Venezuela is a fascist-style dictatorship maintained by huge force and that’s what they’re aiming to create.

The two opposition leaders that were arrested at home the other day were involved in an attempted coup that resulted in 30-40 deaths in 2013/14 – and end up on house arrest, which shows the lie of the repressive regime. They’re still actively working to overthrow the government – they were on the phone day before they were re-arrested, planning to overthrow the government.

There’s a lot of evidence of foreign assistance, too. The US, of course, but also Colombia and other right-wing South American regimes. Police have found stockpiles of gas-masks, explosives, weapons. Chavez’s success inspired left-wing governments in Brazil and other countries and the right-wing governments are determined to roll back those gains. Weapons and supplies have been seized coming over the border from Colombia, they’re a key player.

The US government has given around $30 million since 2009 but funds are also channelled via NGOs.

So if the opposition protester numbers are small, what are the rest of the people doing?

The vast majority of people are solidly behind the government. For every big opposition demo there’s at least one huge pro-government, peaceful chavista demo.

The ordinary people are extremely active in combating the economic war – volunteers from poor areas producing/distributing goods that are in shortage. The people are extremely politically aware and educated and they’re absolutely committed to overcoming this attack on their society.

People are also organising huge mass meetings about the new constituent assembly to educate, explain what it is, how it works, how to run for it – there’s a lot of effort to build democratic engagement.

The US/European media has portrayed the Constituent Assembly as an anti-democratic measure – you’re saying it’s not?

On the contrary, it’s an attempt to entrench the democratisation of Venezuela by creating a body that can amend the Constitution. The government is trying to make it harder for the right wing to roll back the democratic revolution, the concept of local communes, LGBT rights etc.

Maduro has even been delaying the vote to give the opposition more time to engage but they’re not interested.

All the Constituent Assembly is is just real, radical, grassroots democracy. The western media are saying Maduro will ban other parties but it’s completely untrue. They’re portraying a repressive, violent regime – but dozens of national guard and police have arrested and charged for excessive violence, even though they faced extreme provocation. This is not what it’s being made to appear.

Mike, you’ve been incredibly generous with your time. How would you like to round off your comments?

The perception outside Venezuela is completely at odds with the reality on the ground. The whole ‘failed state’ thing – it’s just issues in economy being blown up. Unemployment in Venezuela is only 6.6%, foreign debt payments are being made on time. GDP is rising.

Of course there are problems from the fall in oil prices, but all the things being portrayed big in the media are created by the opposition – the violence, the shortages. There’s an attempt to create an opportunity for the western, mainstream media to say ‘this country is screwed’ so it can be ‘rescued’.

The SKWAWKBOX needs your support. This blog is provided free of charge but depends on the generosity of its readers to be viable. If you can afford to, please click here to arrange a one-off or modest monthly donation via PayPal. Thanks for your solidarity so this blog can keep bringing you information the Establishment would prefer you not to know about. 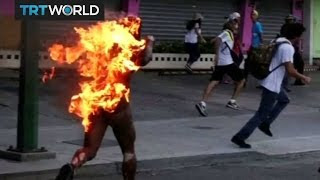