Eye-opening Video Report on VIOLENCE and RACISM in VENEZUELA

(1) The attached eye-opening video report of US journalist Abby Martin about the violence that is currently taking place in Venezuela and who is responsible for it. Ms Martin has just returned to the US from Venezuela where she went into the streets to view the violence first hand and to report on it;

(2) The attached Newspaper report about 21 year old ORLANDO  FIGUERA, a BLACK Venezuelan who — on May 20– was accused of being a Government supporter by a group of “peaceful” Opposition “protesters”, and was brutally beaten, stabbed six times, doused with gasoline, and set on fire. He subsequently died on the 5th of June.

Please consider doing more in-depth reporting about what is actually going on in Venezuela, rather than merely accepting the view of main-stream Western news outlets that are being used in a campaign of Psychological Warfare against a Socialist Government that Washington is determined to get rid of.

Please also consider doing at least one major story on the tragic story of our BLACK  BROTHER, Orlando Figuera, whose only “crime” was being BLACK, and being a member of an historically disadvantaged community that has only benefitted from Venezuela’s oil wealth since the Socialist party of Chavez and now Maduro came to power.

Caracas, June 5, 2017 (venezuelanalysis.com) – A Venezuelan man burned alive by opposition protesters has died of his injuries as anti-government unrest claimed two more lives over the weekend.

Afro-Venezuelan Orlando Figuera died in the hospital on Saturday evening after suffering six knife wounds as well as first and second-degree burns on 54 percent of his body.

On May 20, the 21-year-old was passing through the opposition stronghold of Chacao when he was accused of being a government supporter by masked protesters, who brutally beat him before dousing him in gasoline and setting him on fire.

The death was made by public by the national ombudsman, Tarek William Saab, who called for the “maximum sentence against the lynchers”.

“Orlando Figuera, beaten, stabbed, and burned alive by “protesters”, is the symbol of hate crimes in Venezuela,” the top human rights official declared via Twitter. 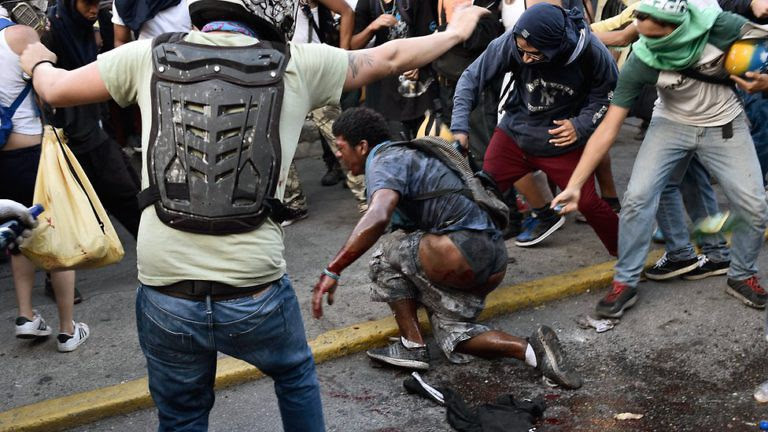 Orlando Figuera is set on fire by a group of opposition protesters in Altamira on May 20. (AFP)

“Why does [National Assembly President] Julio Borges allow this? Why does [Miranda Governor] Henrique Capriles allow it? Who do I blame? The opposition, because they are the ones who doused my son in gasoline like an animal,” she stated.

Esparragoza has reported being fired from her job as a domestic worker in a private residence, which she has denounced as a reprisal over the VTV interview.

For its part, the Public Prosecutor’s office (MP) has indicated that investigations into the murder continue and that the alleged perpetrators have been identified.

In addition to Figuera, two more people have died of injures linked to violent protests that have rocked the country for the past two months.

On Friday, Luis Miguel Gutierrez Molina (20) died of a bullet wound he suffered during a protest on May 17 in Merida state. El Universal has reported that the incident took place during clashes between demonstrators and authorities.

The MP has dispatched a state prosecutor to investigate the homicide.

Meanwhile in Lara, another man died in the hospital on Saturday after being shot in the vicinity of a protest on April 11.

According to the preliminary MP report, Yoiner Peña (28) was shot in the back near a protest in Barquismeto by unknown assailants in a pickup truck who reportedly opened fire on those present.

However, the national ombudsman’s office has issued a conflicting account, suggesting that Peña was “mortally wounded in an [anti-government] barricade”.

According to Saab, Peña is the ninth person killed at opposition barricades since the violent protests began on April 4.

Seventy-three people have lost their lives as a result of the unrest, including at least 11 people killed by authorities and 21 deaths caused by demonstrators.

Opposition leaders have announced a fresh round of protests for this week, vowing to remain in the streets until the government meets their various demands, including holding presidential elections one year ahead of schedule.