Preparing for Another Round of Election

As sure as God made little green apples, the giving away of building materials immediately before an election in SVG to influence the outcome of that election is bribery and is illegal. Everyone involved that knows the truth is guilty of a crime, the arranger, negotiator, giver, the distributor, the loader of the truck, the truck driver, the recipient.

The use of a real or false Program, to create a sham reason to give away the building materials and other items is another conspiratory criminal act. So using a program like Lives to Live is in itself a crime if that institution is operating a sham created to shield the very politicians who created the program to claim legality, and hide illegality.

For instance, I have checked out Lives to Live; there seems to be no parliamentary oversight for the program or registration anywhere within the government website. I have sent enquiries to a government department about the program, no one has answered me.

Most of us, and certainly every lawyer knows what a sham is, and is fully aware that a sham is an artificial, bogus, dummy, ersatz, fictitious, fake, false, faux, imitation, imitative, man-made, mimic, mock, pretend, simulated, substitute, and synthetic reason created to hide something, which in this case is the crime of election bribery.

What is ultra important is intent in these matters, and by what has been said by a leading politician in the past makes the intent understandable and undeniable. Remember a program such as Lives to Live cannot commit a crime, only those operating or controlling it can commit the crime in the name of the program.

Because the process has been done before in SVG, it does not make it any less a crime when it is done again at any time in the future. 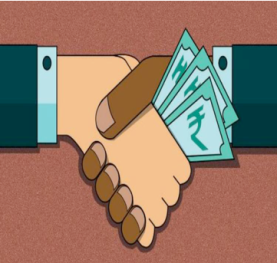 There are different causes and factors to the spread of election bribery, which impact the integrity and transparency of an election and the real will of voters of making their own choice of a qualified representative.

Deteriorating social conditions play an essential role as one of the facts that lead to the appearance of political corruption.

Poor education and absence of a good model, as well as family disintegration, are all facts that affected drive to crime in general, including the crime of election bribery.

In many parts of the world leaders are afraid to give up power because they have done so much wrong. They and people under them have stolen and plundered every ministry. If the leader loses power he may well end up in prison, or worse losing his property and all he has stolen and stashed. So such a leader will ensure people vote for him by paying money or giving away things as a form of payment for their vote.

Not that I am saying, or inferring this is the case with SVG, I am not a policeman or a Judge, so such matters are for them.

Often these type of leaders stand out because they bring their family into government to assist in keeping a firm hold on ministries, the most powerful position after Prime Minister is the Minister of Finance. Once a family controls the major ministries they own the government. I am of course thinking about people like Francois “Papa Doc” Duvalier and his son Jean-Claude Duvalier of Haiti. The other danger is from political families forming dynasties which eventually means they own everything including every square inch of every corner of what is now their personal plantation. This can happen anywhere if the people allow it.

In many Caribbean countries, there are indicators of the spread of administrative corruption. Among those are bribery, embezzlement, apathy, low motivation for work, and other negative phenomena that several Caribbean countries have come to suffer. Corruption is so destructive eventually it will destroy a country.

There are undoubtedly some psychological reasons and facts that lead to the crime of election bribery. Lack of condemnation through local media, in many ways, fails to help stop the practice and perhaps helps to spread deviation among citizens, particularly youth, and provides criminal motivation and fertile atmosphere for electoral and other bribes.

The local press and media indeed have to regularly condemn bribery in the strongest of terms.

Integrity is something that can be gained and shall be established in a person in early life. Schools should pay more attention to civic and moral education. The Vincentian so-called ‘Education Revolution’ does nothing to inform the children that election or any other kind of bribery is a gross anomaly. Children think it is normal for their parents to receive a truckload of building materials from a political party. Children sit and listen to their dad discussing who he voted for, and why.

The acceptance of the bribe throughout Saint Vincent is so widespread among many citizens. Even police officers and others from almost every walk of life are involved. People don’t just accept the bribe; they expect it at every election.

Church leaders have a great part to play, but they themselves are receiving year round tax free status, tax free imports and all sorts of special treatment. So they say nothing, as men of God they are in league with the devil.

The police know exactly what is going on and do not raise a finger; they stand by and wave the delivery truck on their delivery journeys to the bribed. They must be aware a crime is taking place yet do not investigate or act to stop it. Worse than that, in some cases are directly and knowingly involved.

Even the States numerous lawyers, judges, and magistrates know it is happening and do not contribute as much as a comment, not a single word of condemnation.

Likewise, Transparency International, The Commonwealth, the US State Department, all know about it, because I have written to them about it in the past, they do nothing except report that all is well. What is wrong with these people? Do they approve of bribery?

The giving away of the building materials before Vincentian elections is not a matter of giving out a few trinkets, a few T-shirts and a bottle of rum. It is such an enormous operation that it is believed to exceed the value of twenty million US dollars, perhaps even double that figure.  Prior to every election like clockwork a ship arrives from a company called Tankweld Ltd of Jamaica.

There has been a stream of essays and articles over the last twenty years about what is going on in SVG at every election time, nothing you read here has not been said or written about before.

If the so called, Lives to Live program, which at last elections was supposedly used to give away these materials was in continuous business of giving away building materials every day, every week, of every year, it may have some credible status. But when Lives to Live only gives away such materials during a few weeks and days before each election, it is a most obviously a sham. Before the last election, the materials were allocated by order form, through, or at the ULP constituency offices. I witnessed it with my very own eyes and with my very own ears.

I feel sure that the giving away building materials in the few weeks prior to each election, would not stand up in a court of law as straight forward aid to the people by an agency or program.

It is also the responsibility of the National Democratic Party to stand up and call it a sham and protest. They should employ outside observers and present the matter to the courts. They must do more, they must report the matter internationally to every agency possible.

It is the responsibility of the Media, printed and online, to investigate and call it the way it is. The media must do more, but most of the local media are frightened to publish the truth. They need to publish statements about it before, and during it taking place, not just afterwards, or as the majority do, not at all. The whole world relies on the media.

I am calling on decent Vincentian people who are willing to participate in the videoing of the Vincentian people’s mass bribery with building materials during the run-up to the forthcoming election.

I want people to video the trucks queuing at the storage yards, registration numbers, being loaded, on the road, unloading, the recipient’s names and addresses. I want phone videos also of the proposed issuing of the acquisition notes or delivery notes. Please, a record of anything and everything. The video compilation will be made into an international TV film featuring bribery of the Vincentian people. It will be screened locally, regionally, and internationally, particularly in the US and UK. It will be seen in schools and universities everywhere.

Helpers’ identities will be treated as divine secrets. A little nearer the election date, I will publish my postal box address in Grenada.

Any professional video operators or film makers that wish to participate, please contact me. Students are encouraged to help with this project, democracy, your future and that of your country are at dire risk from bribery.

Government whistleblowers, we need copies of invoices and delivery notes, bills of lading, documents, and anything relevant. Please do nothing illegal and do not steal anything. If you are reporting wrong doing you are protected by international law.

Remember, democracy dies in darkness, and SVG is being bathed in darkness politically.

Please feel free to Contact me initially at    jollygreenandall@gmail.com

PS any videos of unloading at the port and the places of current storage will be gratefully received. Please be discreet in videoing or filming, and stay safe.